He was a retired sales representative and sales manager for Kentucky Electric Steel Co. and Reliance Steel.

He served in the United States Army during World War II with the 192nd Tank Battalion, received two bronze stars, was a prisoner of war and was in the Bataan Death March. He was a member of the V.F.W., D.A.V., and an active member of Indian Hills Christian Church in Danville for twenty-five years. Mr. Moore retired as a sales representative and sales manager for KY Electric Steel Co. and Reliance Steel and he enjoyed gardening.

Albert B. Moore Private Albert Bland Moore joined the Harrodsburg National Guard unit sometime before the activation in November 1940. He was transferred to Headquarters Company when it was formed in January 1941. During the attack, Bland was delivering lunch to members of the tank crews at their tanks. As he drove, his truck was strafed by a Japanese Zero. He shot down one plane with a machine gun. He was taken prisoner on 9 April 1942 the unit’s trucks were used to move them to Mariveles and 30 survived the Death March. At San Fernando he was put on a train for Capas. 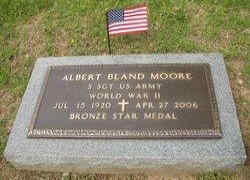