Archibald B. Rue Second Lieutenant Archibald B. “Arch” Rue joined the Harrodsburg National Guard with his brother Edwin some time before the unit was activated in November 1941. He was taken prisoner on April 9, 1941. He survived the Death March and was held at Camp O'Donnell and Cabanatuan. He was sent to Bilibid Prison as and eventually put on board the Oryoku Maru for transport to Japan. The ship was attacked by Navy planes seventeen times before sunset and six bombs hit the ship. The next day the Navy resumed the attack. The POWs were finally swam ashore near Olongapa, Subic Bay, Luzon as the Navy planes realized it was a prisoner transport and stopped the attack. The surviving prisoners were moved by train to Manilia and put aboard the Enoura Maru bound for Formosa. The ship was bombed and sunk by American planes on January 13, 1945, while it was still docked. Two days later, he boarded the Brazil Maru enroute to Moji, Japan. By the time he arrived and was sent to Fukuoka Camp #22 but soon was ill. He died of Acute Enteritis on April 21, 1945. After the war, at the request of his family, his remains were returned to the United States and buried in Arlington National Cemetery.

2LT Arch B Rue BIRTH, 2 Jan 1916 DEATH, 31 Jan 1945 (aged 29), Japan BURIAL, Arlington National Cemetery, Arlington, Arlington County, Virginia, USA PLOT, Sec: 12, Site: 5220 MEMORIAL ID, 49306151 Gravesite Details 2ND LT AGF 1ST TANK GROUP Second Lieutenant Arch B. Rue, one of Harrodsburg's 66 members of the 192nd Tank Battalion taken prisoner of the Japanese at the fall of Bataan, died January 31, 1945, in Fukuoka Camp, Japan according to a wire from the war department to his mother, Mrs. Insco Rue. The wire stated that the information was received through the International Red Cross which gave acute colonitis as the cause of death. Mrs. Rue was visiting her daughter, Mrs. Edgar McMurtry, in Glendale, when the message was received. When she arrived home Tuesday, she found in the mailbox an undated prisoner of war form card, in which Lt. Rue said his health was good and he was feeling fine, made inquiries after two younger brothers and others of the family, and added: "Can't say much. Love to all especially new additions to the family." This indicates to his mother that he had received letters from home. The last card, prior to this, that she received from him was in July, 1944. Lt. Rue was a member of the Harrodsburg Christian Church and a graduate of the Harrodsburg high school and a splendid young man. He was the son of Mrs. Lottie Williams Rue and the late Insco W. Rue. Besides his mother, the following brothers and sisters survive: Miss Loraine Rue, Chicago; Mrs. Elliott Netherton, LaGrange, Ky.; Capt. Edwin W. Rue, who also fell a prisoner of the Japanese at Bataan, and as yet his liberation has not be announced; Mrs. Fred Oversteet, Bondville, Mercer County; Frank Rue, West Frankfort, Ind.; Mrs. Edgar McMurtry, Glendale, Ky.; Leslie Rue with the Merchant Marines; Clarence Rue with Marine Corps at present stationed in Honolulu; Mrs. Hugh Reed, Harrodsburg; Mrs. James H. Ison, with her husband who is in an Army camp in Louisiana; Insco Rue, Harrodsburg; Mrs. Aileen Doeler, who is at home with her mother during the absence of her husband overseas, at present in Germany. (HH Fri Sep 14, 1945) Gravesite Details: 2ND LT AGF 1ST TANK GROUP” 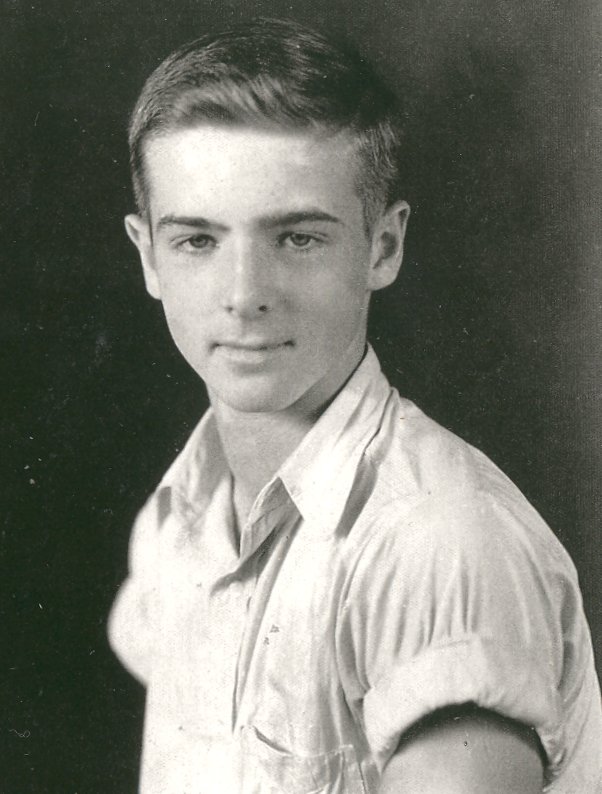 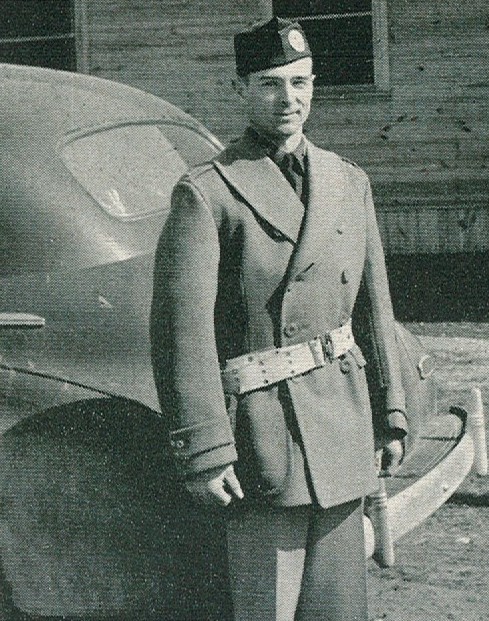 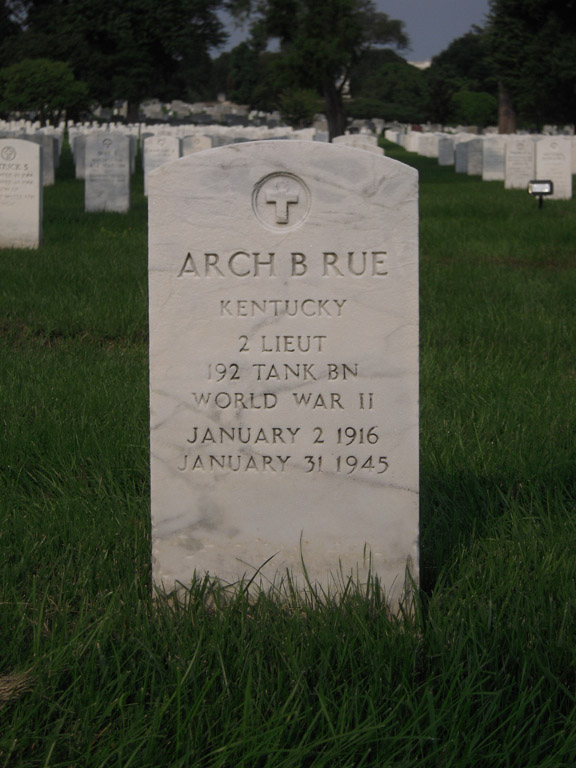 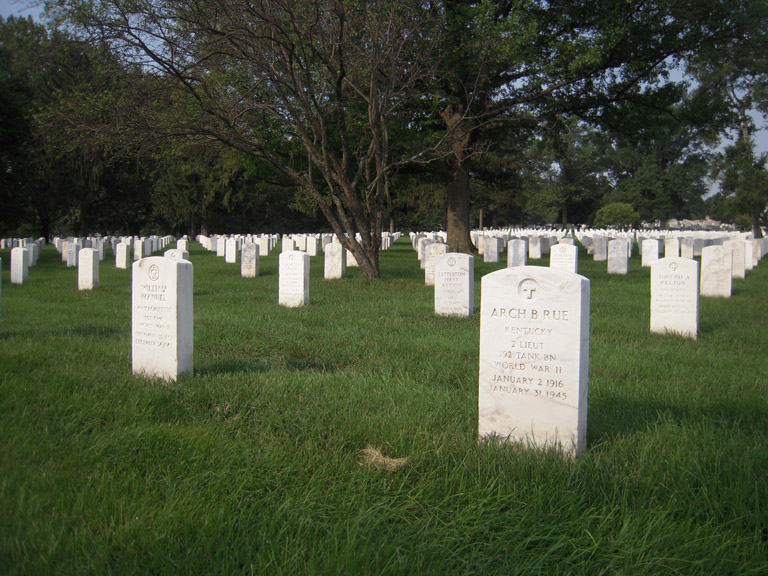