Cecil Sims was a Kentucky National Guardsman called to federal service as a member D Company, 192nd Tank Battalion. He was transferred to HQ Company at Fort Knox, Kentucky.

He was stationed in the Philippine Islands when Japan attacked Pearl Harbor. Ten hours later, he lived through the bombing of Clark Airfield. For four months, he fought, with the other soldiers on Bataan, to slow Japan’s conquest of the Philippines. Without food, without adequate supplies, and no hope of being relieved, he became a Prisoner of War on April 9, 1942, when Bataan was surrendered to the Japanese.

As a POW, he was held at Camp O’Donnell and Cabanatuan in the Philippines. He was later transported to Japan to Fukuoka #4.

He remained in the camp until liberated at the end of the war. He returned to Kentucky went to college and became a teacher. He later became a school principal until he retired in 1981.

Pfc. Cecil J. Sims was born on March 8, 1917, in Mercer County, Kentucky, to Finas J. Sims and Cora Mae Gritton-Sims. With his three sisters and three brothers he lived on the family farm on Cornishvllle Road in Mercer County. He graduated from high school and went to work on the family's farm.

A draft act was passed in 1940 and Cecil knowing that it was just a matter of time until he would be drafted, enlisted in the Kentucky National Guard to fulfill his one year of military service. The tank company he joined had been notified it was being federalized for one year and designated as D Company, 192nd Tank Battalion.

On April 9, 1942, James became a Prisoner Of War when the Filipino and American forces on Bataan surrendered to the Japanese.

It appears at some point he was sick enough to be put into the camp hospital. Cecil spent the rest of the war in the camp and was liberated on September 13, 1945.

Cecil was returned to the Philippines and received medical treatment and to be fattened up. He returned to the United States on October 28, 1945, and discharged from the Army on July 16, 1946. He married Mary "Beck" Sims and became the father of three daughters and a son. The family resided at 322 North Fourth Street in Danville.

Cecil went to college on the GI Bill and graduated from Georgetown College in Georgetown, Kentucky. Cecil worked as a eighth grade teacher from 1953 to 1955 at McAfee Grade School in Harrodsburg. He next took a job at Jennie Rogers Elementary School in Danville, Kentucky. During this time, he received a Master’s Degree in Administration from the University of Kentucky in 1958. He also became the principal of Mary G. Hogsett Elementary School in Danville in 1958 and remained principal until he retired in 1981.

Cecil J. Sims passed away at the Veterans Affairs Medical Center in Lexington, Kentucky, on August 31, 1990, and was buried in Springhill Cemetery in Harrodsburg.

THANK YOU for your great service to all of us. You were my 6th grade teacher at Mary G. Hogsett School, Danville, KY. May you rest in peace now for your sacrifice!

Private First-Class Cecil J. Sims enlisted in the Harrodsburg National Guard unit some time before the unit was activated in November 1940. He was taken prisoner on 9 April 1942 and survived the Death March. He was held at Camp O'Donnell and Cabanatuan. He was put aboard the Hell Ship Nissyo Maru and sent to Moji, Japan and eventually sent to Fukuoka Camp #4 where he worked as a stevedore loading ships and trains. He was liberated on 13 September 1945. He was discharged in July 1946. He returned to Harrodsburg and was an eighth-grade teacher at McAffee Grade School there. He died on 21 August 1990. 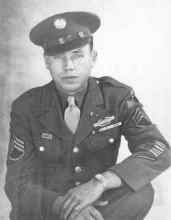 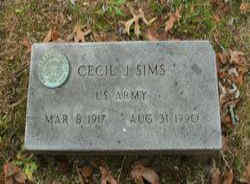 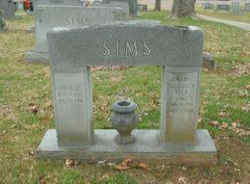