Charlie Quinn was a Kentucky National Guardsman called to federal duty as a member D Company, 192nd Tank Battalion. He was stationed in the Philippine Islands when Japan attacked Pearl Harbor. Ten hours later, he lived through the bombing of Clark Airfield. For four months, he fought, with the other soldiers on Bataan, to slow Japan’s conquest of the Philippines. Without food, without adequate supplies, and no hope of being relieved, he became a Prisoner of War on April 9, 1942, when Bataan was surrendered to the Japanese.

As a POW, he was held at Camp O’Donnell and Cabanatuan in the Philippines. He remained in the camp until liberated by U.S. Army Rangers on January 30, 1945, in what is now known as "The Great Raid."

After being liberated, he returned to Harrodsburg. He was approached by RKO Pictures to tour with John Wayne and Anthony Quinn for the movie "Back to Bataan." When he finished, he moved to Salinas, California. Ironically, C Company, 194th Tank Battalion, which also fought on Bataan, was originally a California National Guard Tank Company from Salinas.

Sergeant Charles Robert Quinn enlisted in the Harrodsburg National Guard unit some time before the unit was activated in November 1940. He was taken prisoner on 6 May 1942 and was held at Cabanatuan. He was liberated on 31 December 1944 by the U. S. Army Rangers. He died on 8 November 1998 in Crescent City, California. 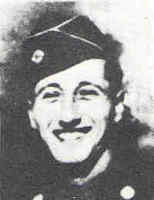