The Harrodsburg Tankers, initially known as the 38th Tank Company, were a Kentucky Army National Guard unit stationed in Harrodsburg who were called to active duty prior to World War II. When they entered federal active duty, they were re-designated as Company D, 192nd Light Tank Battalion.

After training at Fort Knox, Kentucky, and Camp Polk, Louisiana, they were shipped overseas, landing in the Philippines on Thanksgiving Day, November 20, 1941. On December 7, 1941, Japan attacked Pearl Harbor and only hours later began an attack on the Philippines.

The Harrodsburg Tankers, along with the allied forces, fought the Japanese valiantly without reinforcements or resupply until ordered to surrender in April 1942. Those who could not escape to Corregidor were in the infamous "Bataan Death March". They were all eventually taken prisoner of war. Only 37 of the original 66 Kentucky Guard Members from Harrodsburg survived Japanese captivity.

Logan enlisted in the Kentucky National Guard sometime before the unit was activated in November 1940. He was inducted into the U.S. Army on November 25, 1940, at Harrodsburg, Kentucky. At the time of enlistment Logan was single, with no dependents. He was described as being 71" high and as weighing 170 pounds. His stated education level was two years of high school, and his stated occupation was automobile serviceman.

According to the service information on the Proviso East High School Bataan Commemorative Research Project site, Logan was engaged in the Battle of Luzon, the Battle of Bataan, and the Battle of Corregidor in the Philippines. He was taken prisoner on May 6, 1942, when Corregidor fell.

Logan was imprisoned at Cabanatuan in the Philippine Islands. He was involved with the Bachrach Garage Detail, where prisoners-of-war repaired vehicles for the Japanese. He was on board the Hell Ship Nissyo Maru, which set sail from Manila on July 17, 1944, arriving in Takao, Formosa on July 27, 1944. The ship then set sail from Takao on July 28, 1944, arriving in Moji, Japan on August 3, 1944. Logan was imprisoned at the Narumi Camp in Japan, where he worked in wheel manufacturing for the Nippon Wheel Manufacturing Company.

Logan was liberated in September of 1945

He was a retired farmer and attended Dry Branch Baptist Church.

Private Ernest Logan Sampson, Jr. enlisted in the Kentucky National Guard sometime before the unit was activated in November 1940. He was taken prisoner on 6 May 1942 when Corregidor fell. He was held at Cabanatuan and was sent to Japan’s Narumi Camp where he worked in wheel manufacturing for the Nippon Wheel Manufacturing Company. He was liberated in September 1945. He died on 1 December 2001. 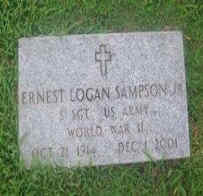 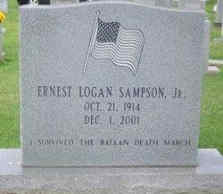