George A. Vanarsdale First Lieutenant George A. “Jimmy” Vanarsdale joined the Harrodsburg National Guard unit some time before the activation in November 1940. In early 1941, he was transferred to Headquarters Company. He was taken prisoner on 11 April 1942 and were put on trucks to Mariveles. He survived the Death March. He was held at Camp O'Donnell and Cabanatuan. He was later taken to Bilibid Prison and put onboard the Oryoku Maru for transport to Japan. Enroute the ship was attacked by Navy planes seventeen times before sunset and six bombs hit the ship. The next day the Navy resumed the attack. The POWs were finally swam ashore near Olongapa, Subic Bay, Luzon as the Navy planes realized it was a prisoner transport and stopped the attack. They surviving prisoners were moved by train to Manilia and put aboard the Enoura Maru bound for Formosa. The ship was bombed and sunk by American planes on January 12, 1945, while it was still docked. He died during the attack and subsequent sinking. After the war the remains of the American soldiers who died in the sinking of the Enoura Maru were exhumed and reburied in the Punch Bowl in Hawaii.

George Alger VanArsdall BIRTH, 18 Nov 1912, Harrodsburg, Mercer County, Kentucky, USA DEATH, 9 Jan 1945 (aged 32), Philippines BURIAL, Spring Hill Cemetery, Harrodsburg, Mercer County, Kentucky, USA MEMORIAL ID, 171594156 1st Lt. George Alger Van Arsdall 2nd Lt. George A. Van Arsdall was born on November 18, 1912, in Harrodsburg, Kentucky, to Riker Van Arsdall & Maude Rose-Van Arsdall. He had four brothers and three sisters and was known as "Jimmy" to his friends and family. George grew up at 108 North Greenville Street and attended local schools. George joined the 38th Tank Company of the Kentucky National Guard which was headquartered in an armory in Harrodsburg. He worked as a farmer and was married to Alice. He was the father of one daughter and two sons. On November 25, 1940, his tank company was federalized as D Company, 192nd Tank Battalion. Arriving in Philippines, George and the rest of the 192nd were taken to Ft. Stotsenburg. Upon arrival at the fort, George was put into the hospital because he had developed tuberculosis. He became a POW, Bataan Death March, Camp O'Donnell was a death trap. As many as fifty POWs died each day. At some point, George was selected to go out on the Nichols Airfield on the Las Pinas Work Detail. With him was Capt. Edwin Rue. This detail quickly became known as a death detail because of the large number of POWs who died from being overworked and abused. Since George's final resting place is unknown, his name appears on the Tablets of the Missing at the American Military Cemetery outside Manila. Since there was no second way to confirm the remains were actually those of George Van Arsdall, the remains were buried as "Unknown." Note; This a summary of the information found online. Esther Louise (McNamer) VanArsdall of Harrodsburg, Kentucky, daughter of Robert Clyde McNamer and Nettie May Widdig, born 09 July 1916, died Tuesday 02 March 1999 in Harrodsburg, Mercer County, Kentucky, and was buried at the Spring Hill Cemetery in Harrodsburg, Kentucky. She was the widow of Lt. George Alger "Jimmy" VanArsdall, son of Riker Samuel VanArsdall and Maud Rose, who died at sea in World War II. Survivors in her immediate family include two grandchildren: Elizabeth "Lisa" VanArsdall Reining and Alexander Bertrand VanArsdall, children of Jimmy and Esther's deceased son William Riker VanArsdall and his wife Melena Jacobs (Harrodsburg Herald, Thursday March 4,1999). ∼Died near Formosa, Sunken Japanese ship Inscription: George A. VanArsdall 1st LT US Army World War II Nov. 18, 1912 Jan 9, 1945 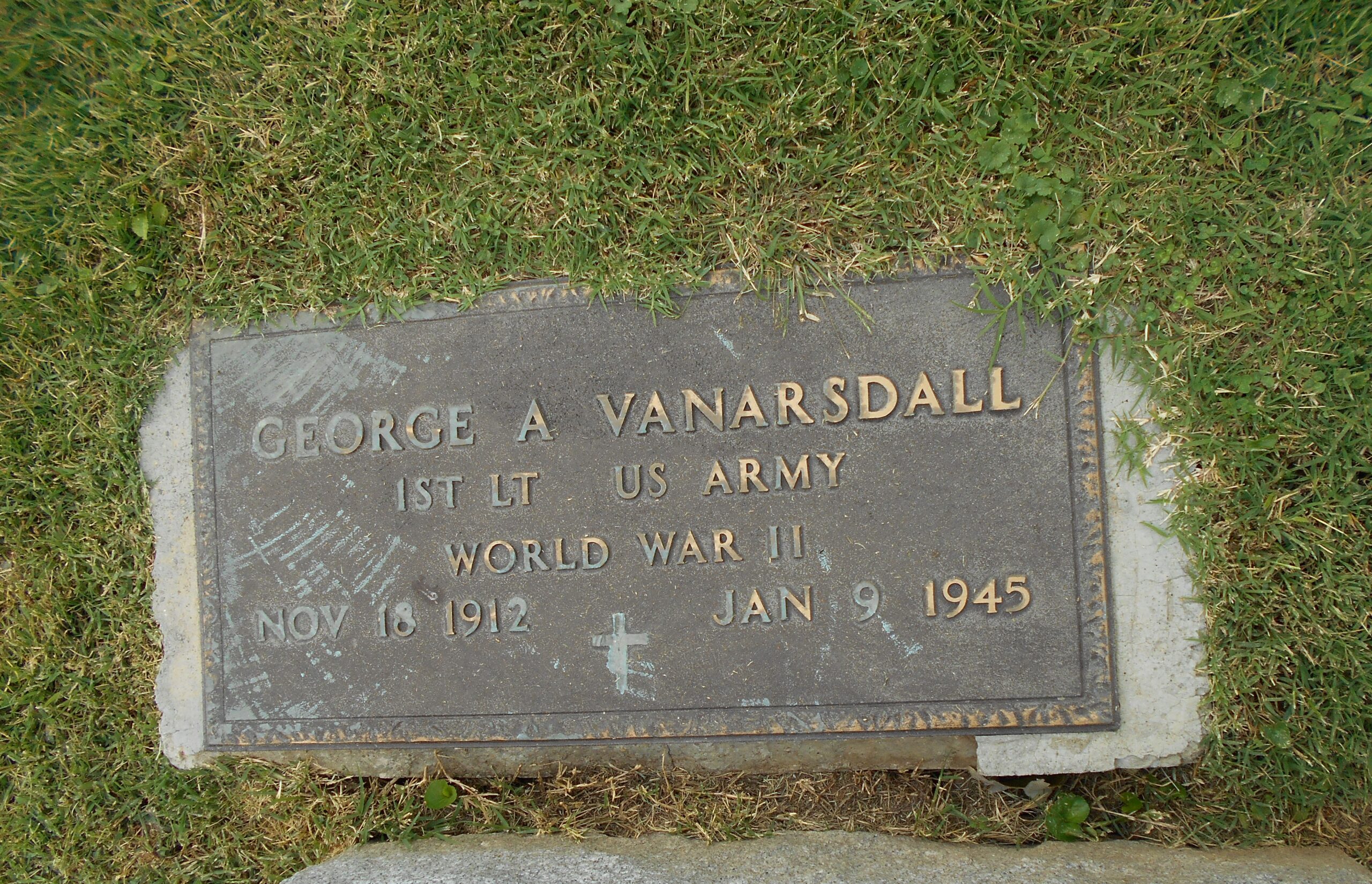