Hugh J. Leonard Private Hugh J. Leonard enlisted in the Harrodsburg National Guard unit some time before they were activated in November 1940. He was taken prisoner on 9 April 1942. He survived the Bataan Death March. He was held at Camp O'Donnell, Cabanatuan and Davao, Mindanao. He was on three Hell Ships, Interisland Steamer, Transport 86 and Shinyo Maru. The U.S.S Paddle attacked the unmarked prisoner transport off the west coast of Mindanao and he was lost when it sank on 7 September 1944.

Pvt Hugh Jack Leonard BIRTH, 1915, Boyle County, Kentucky, USA DEATH, 7 Sep 1944 (aged 28–29), At Sea MEMORIAL SITE*, Manila American Cemetery and Memorial Manila, Capital District, National Capital Region, Philippines, * A structure erected in honor of someone whose remains lie elsewhere. PLOT, Tablets Of The Missing MEMORIAL ID, 56761692 Hugh was the son of Jackson Hugh Leonard and Bessie Walston-Leonard. Identified siblings were: Lowell Byron, John Walston, Benjamin Warren, Elizabeth E., and Lois Mildred. On 25 Nov 1940, Hugh J. Leonard (B: 1915, Kentucky), of Boyle County, Kentucky; enlisted as a Private in the National Guard Infantry in Harrodsburg, Kentucky. He was described as 6 feet, 150 pounds, and in the public service occupations (WWII Enlistments). Hugh served with the 192nd Tank Battalion defending the Philippines against the Imperial Japanese Invasion. The 192nd covered the retreat to the Bataan Peninsula. They defended the air field, the beaches, and provided support to the Infantry. On 8 Apr 1942, the 192nd received codeword "Crash", which was an order to destroy their remaining Stuart tanks. On 9 Apr 1942, American and Filipino forces on Bataan were compelled to surrender. Hugh endured and survived the Bataan Death March that followed. However, he lost his life while a POW on the "Hell Ship" Shinyo Maru which was sunk by the US submarine USS Paddle. Hell ships were unmarked as POW carriers to act as decoys. Gravesite Details Entered the service from Kentucky. 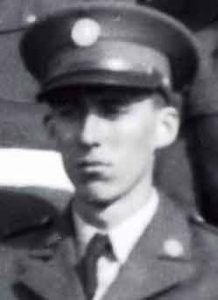