Jennings B. Scanlon Sergeant Jennings Bryan Scanlon enlisted in the Harrodsburg National Guard unit some time before the unit was activated in November 1940. He was taken prisoner on 9 April 1941 and survived the Death March. He was held at Camp O'Donnell and Cabanatuan #1 where he died of dysentery on 8 June 1942.

Jennings Bryant “J.B.” Scanlon BIRTH, 4 Jul 1922, Harrodsburg, Mercer County, Kentucky, USA DEATH, 8 Jun 1942 (aged 19, Philippines BURIAL, Spring Hill Cemetery, Harrodsburg, Mercer County, Kentucky, USA MEMORIAL ID, 63467498 Sgt. Jennings Bryan Scanlon, previously reported missing in the Philippines, died July 8, 1942, in a Japanese prisoner of War camp of malaria and dysentery, according to a telegram from the War Department received Tuesday by his parents, Mr. and Mrs. J. B. Scanlon. Jennings Bryan Scanlon was 21 when he died. Joining the Mercer National Guard Tank Unit when a mere boy, he was a faithful and interested member for several years before the Unit was called into training at Fort Knox, and later was merged into the 192nd Tank Battalion which sailed for the Philippines in November 1941. He was one of 66 Mercer men taken prisoner of the Japanese at the fall of Bataan in April 1942. He was a graduate of Harrodsburg High School. Surviving are his parents: J. B. Scanlon and mother Alma Crews Scanlon,1 brother, Donald Scanlon, and 1 sister, Miss Mary Frances Scanlon, all of Harrodsburg." Harrodsburg Herald, Friday, Aug. 3, 1945 Sgt. Scanlon was the grandson of Mr. Archie Wood Scanlon and his wife, Mary Elizabeth Gaines Scanlon. Mary Frances (b. 1920-d. 1993 in Harrodsburg, KY). His parents are buried at Springhill cemetery. Alma Frances Crews Scanlon,b. Nov. 7, 1897 died at age 79, Oct. 21, 1977 and buried in Scanlon family grave plots Most likely Sgt Scanlon was buried in a mass group gravesite in the Philippines and was later given a military marker at Spring Hill cemetery. Information from Bataan soldier’s memorial website, http: www.provisok12,ilus Bataan, suggested by Don G. Thank-You Don G. for your suggestion. Sgt Jennings Bryant Scanlon, b. 4 July 1922, Harrodsburg, Parents owned a general store. He had 2 siblings, 1 sister and 1 brother. He was a 1938 graduate of Harrodsburg High school and joined the Kentucky National Guard while still in High School. He was inducted in U.S. Army 25 Nov. 1941 with his training held at Fort Knox, KY then onto Camp Polk in Louisiana before being send to the Philippine Islands. Battle Engagements: Battle of Luxon and Battle of Bataan. He became a prisoner of War 9 April 1942 and was a participant in the Death March. He was in 2 POW Camps: Camp O'Donnell and Camp Cabanatuana. His date of death was June 8, 1942 from dysentery at approximately 8:00 a.m. According to Jack Reed, Jennings could not eat the rice that made up the main part of POW's diet. At the time of death, he weighed 80 pounds. A few days earlier Bland Moore and Earl Pratt found Jennings laying partially in the slit trench that served as the Latrine. They bathed him and brought him back to the barracks. He died a few days later. Burial in Springhill cemetery was 28 Oct 1949. An Indirect quote from soldier's record. 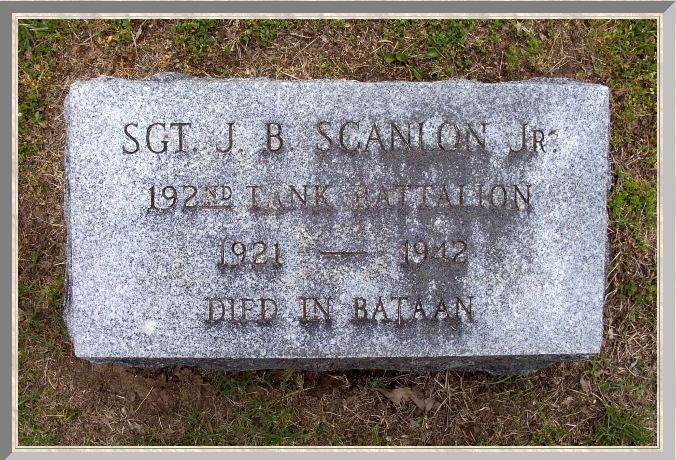