Lawrence would work for International Harvester in Indianapolis. He also worked as a farmer and woodworker.

Born Feb. 7, 1922, in Mercer County, he was the son of the late Charles F. and Lillie Westerfield Martin. He served in World War II where he drove Army tanks. He was the last Mercer County survivor of the Bataan Death March and a Prisoner of War. Survivors include his adopted family, William and Sue Ward of Harrodsburg.

A celebration of life will be 3 p.m. Friday at Alexander & Royalty Funeral Home. Burial with military rites will be in Spring Hill Cemetery. The last survivor of the Bataan Death March is honorary pallbearer.

*At that time, there was still one living member of D Company, 192nd Tank Battalion from Harrodsburg. His name is Morgan French.

Private First-Class Lawrence Ira Martin was one of the original members of the 38th Tank Company. After his activation, he was assigned to the Battalion Headquarters in tank maintenance and driving a truck and attended cook's school at Ft. Knox. He was taken prisoner on 10 or 11 April and drove a truck to Mariveles where they were held at the air field.

He survived the Death March. At San Fernando he was put on a train to Capas and the final march to Camp O'Donnell where he was a cook. He was sent on a work detail to San Fernando to collect scrap metal. He became ill and was sent to a hospital in Pampang. He was eventually sent to Bilibid Prison in an isolation ward.

He was sent on work details to McKinley Field and Nelson Field and held at Camp Murphy. He became sicker and was returned to Bilibid. He was put aboard a ship and sent to Japan, Hiroshima #4 where he worked in the shipyards. He returned to Harrodsburg and was discharged from the army in April, 1946. He died on December 18, 2007. 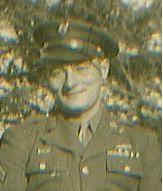