Lucien F. Yankey Private Lucian F. Yankey enlisted in the Harrodsburg National Guard unit some time before they were activated in November 1940. He was taken prisoner on 9 April 1942 and survived the Death March. He was held at Camp O'Donnell and Cabanatuan and was on Formosa at Karenko and Shirakawa. He was later sent to Hoten in Manchuria. He was liberated by the Russians in September 1945. He died on May 28, 1967. 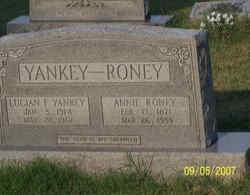