Marcus returned to Kentucky and married Helen Crews and became the father of two sons. The one lasting effect of his time as a POW was vision problems.

Born March 4, 1922 in Harrodsburg, KY, he was the son of the late Raymond and Margaret (Newby) Lawson. He was married to Hellen “Jackie” Crews. He served during World War II in the Army. He was a disabled veteran and a member of the EX-POW Club, Blind Vets, American Legion and the VFW.

Survivors include: his wife: Helen (Crews) Lawson, and one son: Vance (Cheryl) Lawson of Dunnellon, FL; one sister: Virginia Yeast of Harrodsburg, KY; 2 grandchildren; 5 great grandchildren. He was predeceased by a son; Rick Lawson, a brother; William Lawson and two sisters; Elizabeth Rogers and Velva Sanders. Funeral services will be conducted 2:00 PM, Thursday, August 11 at the Ransdell Funeral Chapel by Bro. Jim Owens. Burial will be in the Spring Hill Cemetery, Harrodsburg.

Memorial contributions may be sent to Stem Cell Research.

(Marcus, thank-You for your service in U.S. Army during WWII. You are true hero along with the other soldiers who became POWS in Philippines between the years of 1942- 1945.God bless You and keep your family in his care. RIP, Marcus Left by A grateful Veteran on 25 Apr 2015.)

Marcus A. Lawson Sergeant Marcus Arnold Lawson was one of the original members of the Harrodsburg National Guard Company. At Ft Knox he was promoted to Corporal and then Sergeant and made a tank commander and instructor. Robert Brooks from Sadieville joined the unit from active duty at Fort Knox and was Lawson’s tank driver.

Brooks was killed in the initial attack in the Philippines and Lawson took over his duties. Lawson with others took a boat to Corregidor where he was attached to the Fourth Marine Division. They were taken prisoner and eventually moved to Bilibid Prison outside Manila and then on to Cabanatuan #3 and later Cabanatuan Camp #1. He was put on the Nagato Maru sailed for Moji, Japan and taken to Tanagawa #4-B workingon building a dry dock. He was sent to a Japanese Army Hospital on an experimental detail and given different pills every day for eight weeks. He was later sent to Osaka #1 where he worked as a stevedore. He was later sent back to Tanagawa #4-B and working on the dry dock. When the war was over, he managed to find his way to an American unit.

After extensive medical stays at various hospitals and was discharged on November 5, 1946, as a Staff Sergeant. He returned to Kentucky. He suffered vision problems for the rest of his life. He passed away in Florida on August 6, 2005. 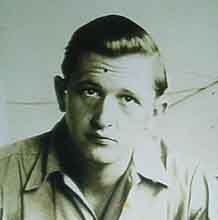