NELSON-EDELEN-BENNETT FUNERAL HOME OBITUARY – 2012 FRENCH - Morgan, 92, a veteran of World War II and the Korean War, survivor of 40 months as an American POW in Japanese custody, loving husband and devoted father, died Friday, February 24, 2012 in Plano TX. Morgan, who lived most of his working life in Radcliff, was born on August 21, 1919, in Perryville KY.

His family worked on various farms around Harrodsburg, KY in the 1920's and '30's. Morgan joined the Kentucky National Guard in 1937 to "get a break from farming." Little did he know then that this was the beginning of a long and distinguished career in the U. S. Army. Morgan participated in the Louisiana Maneuvers in the summer of 1941, and following that, he, his brother, and 64 other men comprising the 38th Tank Company (later designated Company D, 192nd Tank Battalion), a National Guard unit from Harrodsburg, were deployed to the Philippine Islands in November 1941 to provide defense of the Philippines from Japanese forces.

Beginning on December 8, 1941, Morgan and the other men of Company D fought in the delaying action on the Bataan peninsula. Morgan was finally captured at Fort Drum inManila Harbor on May 10, 1942. Morgan was taken from Ft. Drum to Bilibid Prison in Manila, and from there to Cabanatuan POW Camp where he stayed 5 months prior to being transferred on the Ship, Nagato Maru, to Japan in late-1942.

He was a POW in Japan from then until he was liberated by Allied Forces on September 10, 1945. Prior to his death, Morgan was the last surviving member of Company D, now known as the Harrodsburg Tankers. Morgan returned to the United States in late-1945 and, after medical convalescence, returned to active duty in the U. S. Army.

He served two tours in Korea, and upon returning home, married Maxine Milby of Greensburg in 1954. From that time until his retirement from the Army in 1962, Morgan served at various Army posts in the United States and Germany. He retired with 23 years' military service, having earned the Bronze Star, Purple Heart and many other commendations.

Following a short career in the civilian sector, Morgan returned to his favorite work as an instructor at the Armor School at Ft. Knox. He retired from civil service in 1984. Morgan was an active member of the Vine Grove Baptist Church for many years. He enjoyed playing with his grandchildren during their visits every summer. He was a blue-blooded UK basketball and football fan, and enjoyed going to the games in Lexington. In retirement, he enjoyed working on projects around the house and on his property. Morgan was preceded in death by his wife of 55 years, Maxine; his father and mother, the late Clifton and Mary Alice French of Harrodsburg, and two brothers and six sisters.

Morgan's brother, Edward, was killed-in-action in Bataan on April 22, 1942. He is survived by two sons and their wives, Morgan and Mary Jane French of Houston, TX, and Stewart and Anne French, of Dallas, TX; and two grandchildren, Edward Clifton French and Meredith Holly French, both of Baton Rouge, LA.

Morgan French Sgt. Morgan French was one of the original members of the Harrodsburg unit. His brother Edward was also a member. At Ft. Knox he became the crew chief of the maintenance section of company D. French escaped to Corregidor and Ft. Drum. He wastaken prisoner on May 10th 1942. He was taken by boat to an area near Manila and eventually on to Bilibid Prison and Cabanatuan. He was put aboard the Hell Ship Nagato Maru for transport to Japan.

He worked building a dry dock and later in a graphite mine and camps at Tanagawaand and Tsuruga where he worked as a stevedore. He saw the mushroom cloud at Nagasaki from where he was being held. He was officially liberated on September 10, 1945. He eventually returned to Harrodsburg after the war. He remained in the military working as an instructor at Fort Knox until his retirement. He now lives in Texas and is the last surviving Kentucky National Guardsman from Company D. 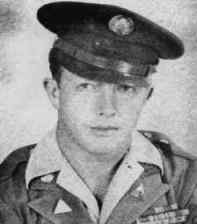