Stanley Hardin Kyler BIRTH, 22 Sep 1922 DEATH, 15 May 1992 (aged 69) BURIAL, Powers Cemetery, Denniston, Menifee County, Kentucky, USA MEMORIAL ID, 19624835Father was Royal Hansford Kyler 1891-1962 (burial unknown) Stanley Kyler was a Kentucky National Guardsman called to federal service on November 25, 1941. The tank company was designated as D Company, 192nd Tank Battalion. He was later transferred to Hq Company. His tank battalion was stationed in the Philippine Islands when Japan attacked Pearl Harbor. He lived through the Japanese attack on Clark Airfield ten hours after Pearl Harbor. On April 9, 1942, Kyler became a Prisoner of War and took part in the death march. He was held at POW camps in the Philippines and Japan until he was liberated.

Private Stanley Hardin Kyler enlisted in the Harrodsburg National Guard unit sometime before the unit was activated in November 1940. He became a prisoner of war on 9 April 1941 and survived the Death March. He was held at Camp O'Donnell, Cabanatuan #1, Bilibid Prison. He was put aboard the Hell Ship Clyde Maru and sent to Moji, Japan and was held at Fukuoka #17. He was liberated in September 1945 and eventually returned to Kentucky and died 15 May 1992. 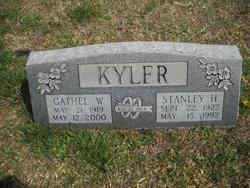