“Vernon H. Bussell Private Vernon H. Bussell joined the Harrodsburg National Guard unit some time before they were activated in November 1940. He was later assigned to Headquarters Company. They were taken prisoner on 11 April 1942. They were trucked to Mariveles where he began the Death March eventually ending up at Camp O’Donnell. At some point he was sent to Manila to work on vehicles in a garage. He was later put aboard the Hell Ship Arisan Maru bound for Formosa. He was lost at sea when an American submarine attacked the unmarked prisoner transport on 24 October 1944.”

BIRTH, 1 Jul 1921, Harlan County, Kentucky, USA DEATH, 24 Oct 1944 (aged 23) BURIAL, Manila American Cemetery and Memorial, Manila, Capital District, National Capital Region, Philippines PLOT, Tablets of the Missing MEMORIAL ID, 56759295 Son of Clora Bussell, he was a member of Headquarters Company, 192nd Tank Battalion. Vernon was taken prisoner on 9 April 1942 by the Japanese during the invasion of the Philippines. He would survive two and half years of brutality at the hands of the Japanese until he died when the Japanese "Hell Ship" Arisan Maru was torpedoed by an American submarine in the South China Sea on 24 October 1944. Gravesite Details Entered the service from Kentucky.” 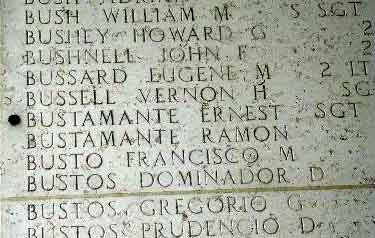