William David Sparrow
BIRTH, 20 May 1915, Boyle County, Kentucky, USA
DEATH, 5 May 1952 (aged 36)
BURIAL, Spring Hill Cemetery, Harrodsburg, Mercer County, Kentucky, USA
MEMORIAL ID, 117400180
Sgt. William D. Sparrow was a member of D Company, 192nd Tank Battalion. He was stationed in the Philippine Islands when Japan attacked Pearl Harbor. He fought the Japanese for four months and when Bataan was surrendered to the Japanese. He, with other members of his battalion, escaped to Corregidor. On May 7, 1942, he became a Prisoner of War when American forces in the Philippines were surrendered to the Japanese. As a POW, he was held at Cabanatuan on Luzon. He was sent to Japan on a "hell ship" and was held as a POW at Tanagawa #4-B and Osaka #5. He was liberated at the end of the war.

Sergeant William D. “Doc” Sparrow, Jr. joined the Harrodsburg National Guard unit some time before the unit was activated in November 1940. When Bataan fell, he escaped to Corrigedor where he was put on beach defense facing Bataan with the attached to the Fourth Marine Division. They were taken prisoner and eventually moved to Bilibid Prison and on to Cabanatuan Camp #3.He was later sent to Cabanatuan Camp #1. He was put aboard the Nagato Maru sailed Moji, Japan and taken to Tanagawa #4-B where he worked building a dry dock. He was later sent to a graphite factory. He was sent Tsuruga POW Camp on a work detail as stevedores unloading ships.

When the POWs were finally liberated, they were returned to the Philippines. He remained there until it was determined that he was healthy enough to return home to Harrodsburg. He died on May 5, 1952. 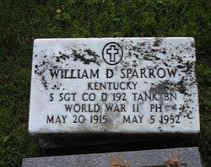