Note: According to Bill Blacketer, his father had worked as a book salesman and was accused of embezzling money from his company. He spent two years in prison. Bill stated that he was in Louisville in December 1969 – just after enlisting in the Air Force – and was walking down the street when he ran into his father. The two talked for several hours before parting company. That was the last time he ever saw his father. Other members of the family have stated that William was involved in some trouble with Chicago hoodlums. According to them, he disappeared not too long after this and has never been heard from again.

As a POW he was held at Camp O'Donnell and Cabanatuan in the Philippines. He was later sent to Japan and held at Yodagawa and Oeyama POW Camps until liberated. After the war William's life was not easy. He simply disappeared and was never heard from again by his family.

William E. Blacketer Private William Elwood Blacketer enlisted in the Harrodsburg National Guard unit sometime before it was activated in November 1940. He was taken prisoner on 9 April 1942 and survived the Death March. He was held at Camp O'Donnell and Cabanatuan. He was put aboard the Hell Ship Nissyo Maru and was sent to Moji, Japan and was held at Oeyama Camp where he worked in a nickel refinery. He was liberated on 2 September 1945. 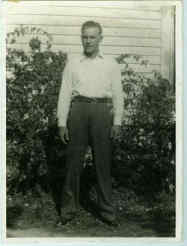