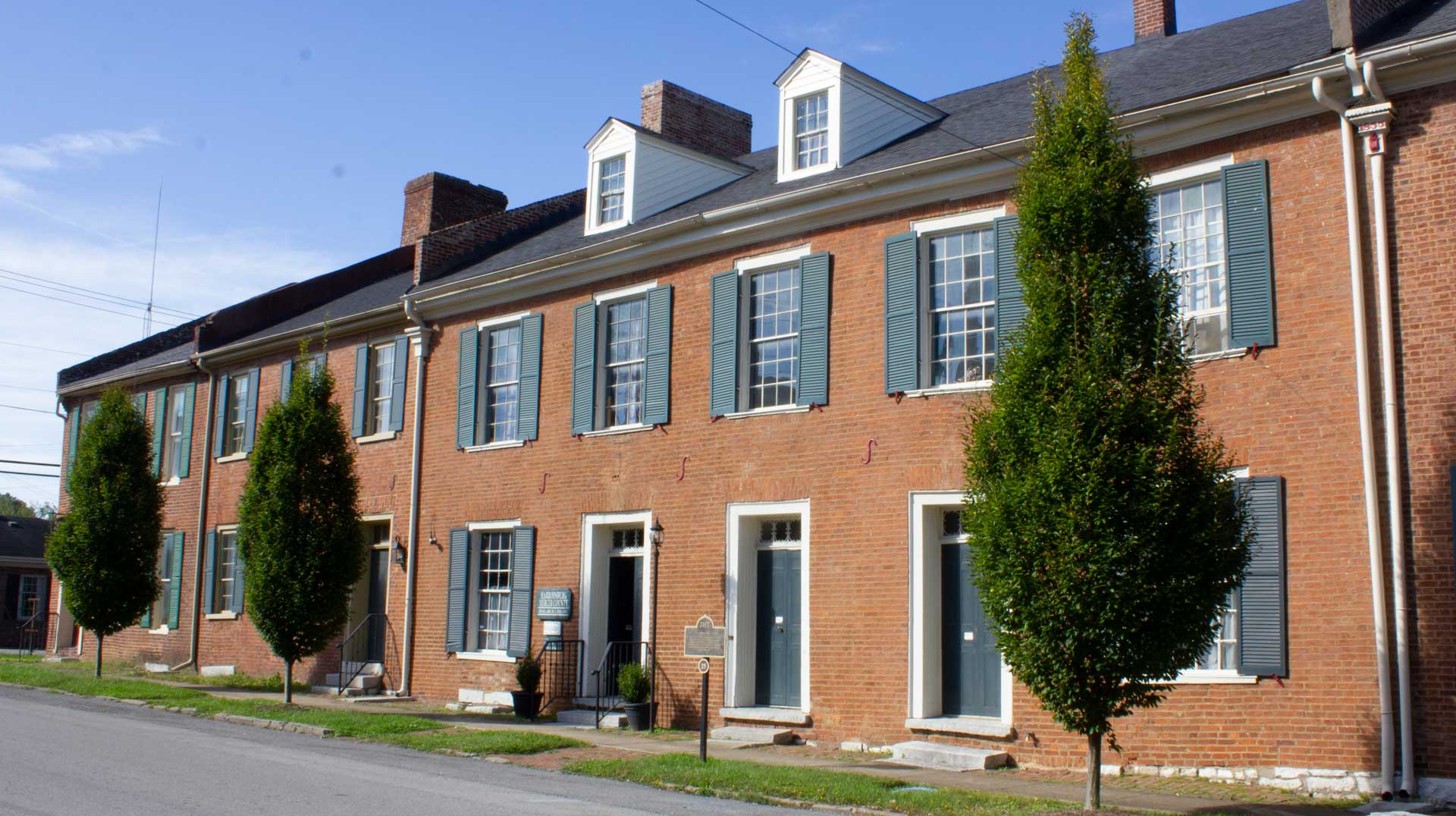 Home of the Harrodsburg Historical Society

Morgan Row is credited with being the oldest row house in Kentucky. It is a four unit, two story row of brick houses on Chiles Street, facing the courthouse. Each unit is separated by fire walls. Records in the Mercer County Courthouse show that Joseph Morgan bought the property in 1814 from James Slaughter for $1,000. The deed specified lots number 33-36. According to a suit in the Mercer County Circuit Clerk's Office, there was a contract made August 14, 1815 by Joseph Morgan with Robert Neele and Augustine Passmore "to complete Morgan's brick house before April 1816." In an old gutter is a date 1807, which must have meant 1817, for Morgan bought the lots in 1814 and completed the first unit by 1817. There is a question whether the building at the south end of the block or the big center unit with the three front doors was built first. Whichever, the units were built one by one. The north unit that the Harrodsburg Historical Society owns was built in 1839 by John Chiles after he bought the property from his father-in-law, Joseph Morgan. The floors and woodwork in all four units are original. The outside brick walls are original and were laid in the Flemish Bond style, which was common in Kentucky until 1840 or 1850.

Use of the Building

Originally, these buildings were used as hotels, rooming houses, a gambling place, eating place, and a stage coach stopping place. Morgan Row was a very fashionable place for the well-to-do public and famous political people. It was elegant for its day. The bar in the big center part is still in place. It was famous for its medical waters. There were many medical springs in the vicinity of Harrodsburg. The dance hall was on the second floor of the largest unit. Squire Joseph Morgan leased and finally sold Morgan Row to his son-in-law, John Chiles, about 1823 or 1824. Chiles married Morgan's daughter Elizabeth (Betsy) in 1823. Chiles ran a flourishing business until 1845, when he sold the property to private people and moved to Lexington to manage the Phoenix Hotel.

Morgan Row finally became rental property and then low rental property. In 1960, this unit was to be torn down for a parking lot. The Harrodsburg Historical Society and interested people united in a joint effort to save the building. Many people gave contributions and Corning Glass Works gave $10,000 so the Harrodsburg Historical Society could buy the building. There was much volunteer work in cleaning and restoring the building to its original look. Paint was scraped down to the original coats. Floors were stripped to the bare wood (mostly poplar or ash). Painters, plumbers, electricians, carpenters, plasterers, and others volunteered their work. Society members washed, cleaned, and scrubbed. Many historical objects, materials, and furniture were donated. Finally, in 1962, this unit was opened as the home of the Harrodsburg Historical Society. It is available to other clubs and organizations. 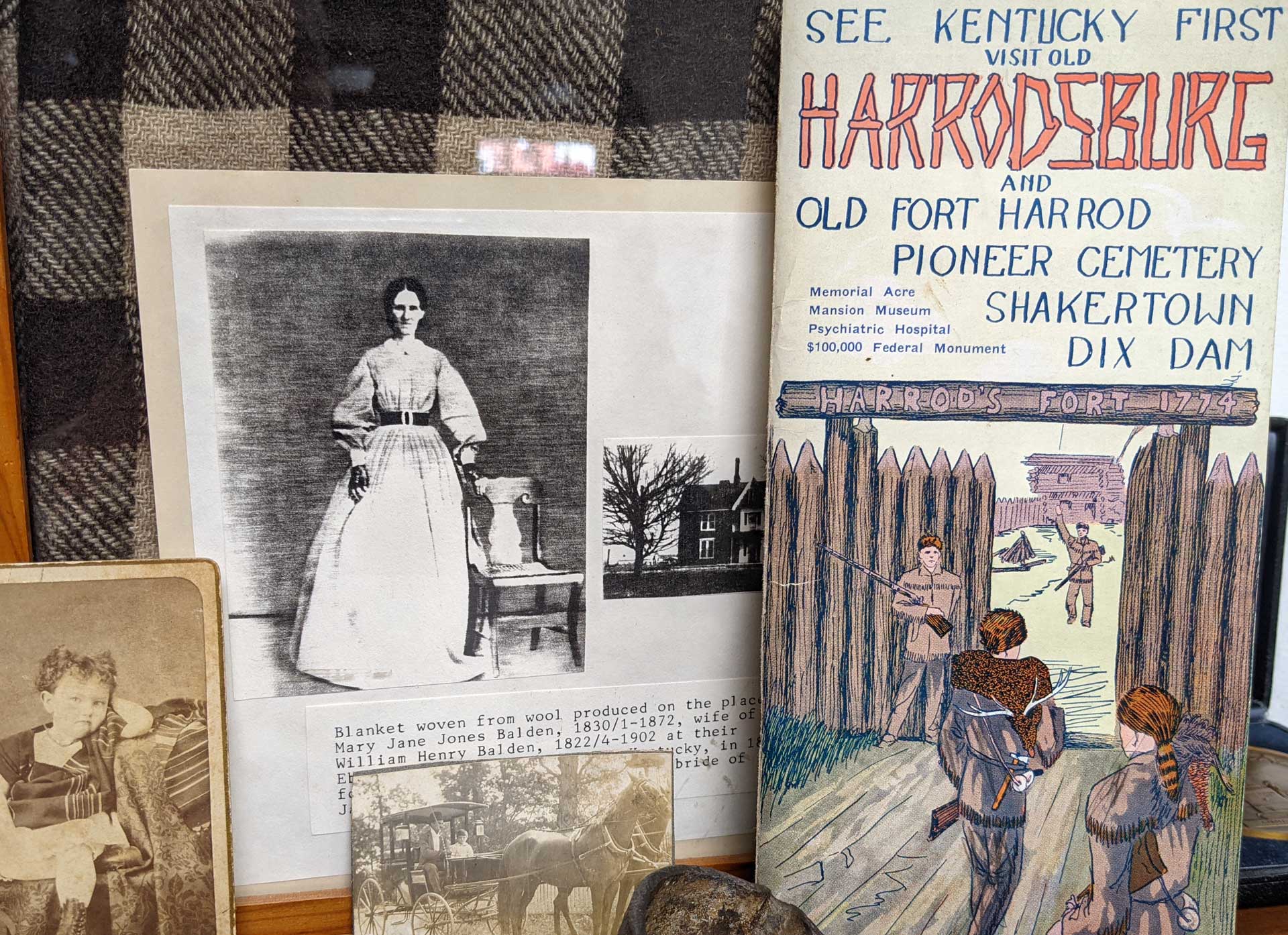 NOTE: The Research library is not open for regular hours in the month of December or on Saturdays. Volunteers may be working some days and you may arrange visits by request. You may call or text: 859-613-1903 to make these special requests or you may email us.

We are open to the public, while complying with the Commonwealth's health guidelines. Please note: You may be asked to wear gloves while using certain materials (gloves are provided by the library)